Facebook Australia made news last week with the innocuously titled press release, An Update About Changes to Facebook’s Services in Australia. In it, Facebook Australia’s Managing Director, Will Easton, wrote:

“Assuming this draft code becomes law, we will reluctantly stop allowing publishers and people in Australia from sharing local and international news on Facebook and Instagram.”

This drastic step is being threatened in response to a recent Federal Government request to the Australian Competition and Consumer Commission (ACCC) to create a mandatory code of conduct that would require content aggregators (i.e. Facebook and Google) to pay news publishers (i.e. News Corp and Nine Newspapers) for their content.

The policy is deliberately vague. It does not stipulate what commercial terms the aggregators and publishers need to agree on. Nor does it outline what content the aggregators should be paying for. Rather, it requires that the aggregators of the Federal Government’s choosing (at this stage just Facebook and Google, not Reddit, Twitter or any other online aggregator) negotiate “in good faith” to agree to commercial terms with news publishers. If Facebook and Google refuse to negotiate, the Federal Government would then impose penalties (yet undefined, although threatened at up to 10% of annual Australian revenue).

It is easy to be cynical about this Federal Government policy. To point out that Rupert Murdoch has been lobbying western governments to embrace this policy for years. To point out that political coverage is still driven by the large news outlets, who happen to be the biggest beneficiaries of this bill. Yet that isn’t enough. News Corp and Nine (owner of the Fairfax papers) can be the biggest beneficiaries and it can still be good policy. So the question becomes, is it?

This code of conduct has been justified as a way to correct the power imbalance of the monopolistic tech platforms. The Government has argued that the publishers’ reliance on these aggregators has allowed the aggregators to become free riders. Using publishers’ content to build their user base while at the same time taking up all the ad revenue that these publishers previously relied upon. Further, the Government argue that publishers cannot simply opt-out of sharing content via these aggregators. Rather, they see Google and Facebook as so dominant that they have become unavoidable trading partners. So the code of conduct, per Josh Frydenberg, is intended to ensure that “when they [publishers] generate original content, that they are fairly paid for it.”

The risk, as the Government sees it, is that these large media organisations are currently unsustainable. The traditional media model was for ad revenue to subsidise reporting and investigative journalism. With ad revenue being taken by the aggregators instead, the concern is that the quality of journalism will suffer.

It is true that the old model of journalism is suffering. However, the idea that these aggregators are to blame is a mistake. The idea that charging the aggregators will save legacy Australian publishers is an even bigger one.

Firstly, let’s be clear, CarSales.com, Gumtree.com and Seek.com have done more to kill the traditional print media business model than Facebook or Google ever have. The classifieds were ‘rivers of gold’ that quickly dried up once the internet offered a more efficient alternative.

Secondly, never before has more well-researched, independent news from quality journalists been consumed. It is just happening in a period of unprecedented disruption as traditional, ad-driven business models are struggling to survive. New entrants like The Saturday Paper are producing high-quality journalism and finding willing, paying customers (119,000 subscribers as of March 2020).

Compare that to News Corp’s total paid subscribers (middle column below) and it is clear that there is demand for journalism, maybe just not from the legacy media companies. 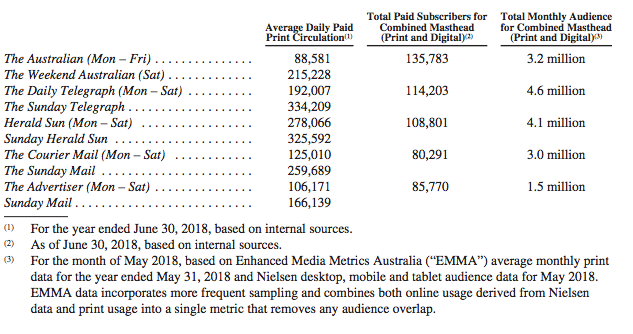 In fact, 14% of Australians currently pay for their news, which represents one of the highest rates in the world. So we should be clear in this conversation that journalism isn’t dying, it is just changing.

New, digital-native, media businesses are producing high quality journalism and taking readership away from the incumbent media businesses. As geographic boundaries have become less important in the digital age, News Corp and Nine are no longer just competing with each other, but are facing competition from the Australian arms of the likes of the New York Times and The Guardian.

At the same time, the best media organisations are innovating with new formats and platforms to distribute their reporting. At its core a news organisation’s product is news and investigative reporting, it should be agnostic to how that is distributed. The New York Times and The Saturday Paper have successfully moved into podcasting (The Daily and 7am respectively), US-based Vox have converted their written journalism into the Netflix series Explained, and the Wall Street Journal have signed a deal with Apple to distribute their reporting through Apple News. There are plenty of ways to make money in the digital media ecosystem, if media companies are willing to innovate.

Finally, the notion that the legacy media businesses are bastions of independent, high quality journalism doesn’t stand up to scrutiny. Print media, especially News Corp, has simply lent into the ‘race to the bottom’ in journalism. More opinion, less investigation and a focus on sensationalist reporting and headlines is a sugar hit for media companies. You get a short-term bump in clicks and paper sales, at the cost of long-term trust in your reporting.

Other media companies have taken a different path, and seen their businesses grow in the digital age. The New York Times have focused on high-quality journalism and built trust in their audience and seen subscriptions rise as a result.

Comparing the performance of News Corp and The New York Times share prices really tell the whole story. Publishers can succeed in the digital era if they are willing to focus on quality reporting and experiment with innovative distribution methods (including through the content aggregators).

With all of that being said, it is fair to ask – what’s the downside of the Federal Government’s approach? Even if Facebook and Google are not the cause of the decline of legacy Australian media companies, isn’t it a worthwhile objective to pursue this policy to try and save them?

Unfortunately, this isn’t the first time such a policy has been tried and we should be concerned about the unintended consequences of the ACCC’s code of conduct. Setting aside the highly arbitrary targeting of Facebook and Google over other content aggregators (Twitter, Reddit, Apple News etc.) and the effect that’ll have on competition amongst these aggregators in Australia, there are downsides for the Australian news and publishing industry as a whole. Ironically, the industry this policy is intended to help may suffer the most as a result.

In 2014, Spain passed a law very similar to that proposed in Australia. Where Google used text snippets and picture thumbnails from publishers’ sites, Google was required to pay a royalty to that publisher. In response, Google shut down its news service in Spain at the end of 2014.

The results were not as Spanish lawmakers would’ve hoped. Some publishers saw double-digit drops in traffic to their websites, and overall the shutdown of Google News reduced overall news consumption by about 20% and reduced page views on publishers other than Google News by 10%. However, the overall effect was more nuanced than that. The largest media companies benefited – as users visited websites of publishers they were familiar with rather than searching on Google. Spain’s second largest daily newspaper, El Pais, saw traffic increase from 8.5 million uniques in October 2014 to 16.6 million in December 2015.

In general, our main conclusions are:

This, perhaps, is the most pernicious harm of this whole policy setting by the Federal Government and the ACCC. The Spanish experience was a boon for large, legacy publishers to the detriment of smaller, independent media companies. In this way, it represents a win-win for legacy publishers in Australia. If Facebook and Google stop hosting news, legacy publishers will increase their readership to the detriment of smaller publishers trying to compete with them. If Facebook and Google agree to pay for their content, they’ll increase their revenue and likely be able to use their scale to negotiate better commercial terms than their smaller competitors (even with the ACCC’s openness to collective bargaining from the smaller publishers).

What’s more, if Facebook and Google do agree to commercial terms with large media companies, the incentive structure the ACCC have created will not encourage well-researched, quality journalism. Rather publishers’ incentive structure will be to ‘win’ the Google and Facebook algorithm. To appear top of the news feed and search results to ensure they’re maximising their revenue. What it will create is more click-bait, more sensationalised headlines, more articles configured to maximise clicks, likes, shares and comments. As an Australian public we’ll be no better off.

There is no doubt that building a regulatory framework that incentivises well-researched, independent reporting should be a priority. Unfortunately, this latest Federal Government policy doesn’t achieve that. It harms consumers, making news scarcer on the platforms they spend so much of their time, and it harms smaller publishers, losing a key method of distribution and discovery if Facebook and Google exclude Australian news from their platforms. The only real winners out of this policy are the large, legacy media companies and a Federal Government trying to look tough on large technology companies.